The car bumper. What are they for, different types, new vs. used

The car bumper is one of the many unglamorous but still highly important parts on your vehicle that you likely never pay any attention to. However, the purpose they serve can be nothing short of lifesaving.

Origins of the car bumper

The car bumper makes up part of your car’s bodywork, both at the front and back. They act as a sacrificial part of your car by taking the main brunt of a minor impact and absorbing the energy that comes with a car accident by deforming and crumpling. A modern bumper is more often than not made from plastic, since it’s a material that deforms easily, and is inexpensive to repair or replace when compared to the steel or aluminium that most other car bodies are made from.

The history of the car bumper can be traced back almost as far as the invention of the car itself. The first bumper was invented by George Albert Lyon and first appeared on a car in 1897. At the time, though, these bumpers were nothing more than a metal bar sitting across the vehicle and were purely cosmetic.

As the motor vehicle continued its development, they got faster and faster with their top speed. With their newfound pace, the necessity for a car bumper became ever greater as roads became faster, more crowded, and arguably more dangerous.

The first usage of the more familiar plastic car bumper that we know and take for granted today came around in the late 1960s and into the 1970s. Perhaps most famously, the 1971 Renault 5 was launched with the black plastic bumpers that eventually became the norm for almost all car manufacturers.

These days, the principles of the car bumper have not changed at all. They still exist to provide a degree of protection against impacts and are predominantly made from plastic in favour of the material’s flexibility and cost-effectiveness. As car design and technology evolve over the decades, though, so does the humble car bumper.

Today, depending on the car you have, your bumper can come in many different styles. For more basic vehicles like smaller city cars, the front and rear bumpers may still be the simple black plastic that was pioneered on the aforementioned Renault 5. A lot of cars these days now have the car bumper painted to match the rest of the body; the result of which allows the plastic bumper to blend in more seamlessly with the design whilst still providing the same amount of protection as the black plastic bumpers.

Recent technological innovations have allowed the car bumper to be more complex than ever before. As consumers tend to favour sporty designs more on their normal cars over the years, bumper designs have evolved to have more aggressive variants in the range, with design trademarks such as rear air diffusers, sharp angles and fins, and even incorporating the exhaust within the bumper design all being included. A regular car being sold today may have multiple bumper designs available, depending on the level of trim that it’s being sold with.

To top that all off, the car bumper now has to coexist with gadgets that are becoming increasingly standard on modern vehicles. Parking sensors are now commonly found on a lot of cars, with the small sensors themselves being incorporated within the bumper. Some cars now have cameras, too, which may be hidden within the bumper design. 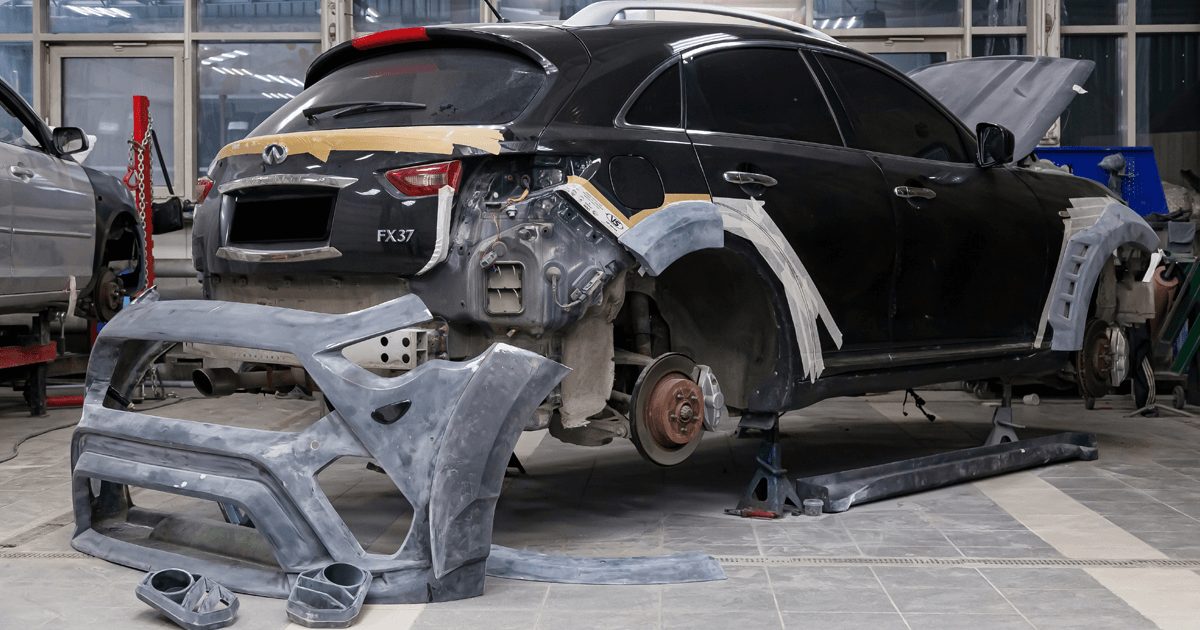 As the bumper gets more complex over time with more advanced and sporty designs and integrated gadgets, it becomes more expensive to replace or maintain. This is despite the fact they are primarily designed as a sacrificial part of your car that should be economical to fix.

Should you unfortunately become involved in a minor accident, it’s highly likely that one of your bumpers will be damaged and will need replacement. One of the most obvious routes to take would be to source a brand-new car bumper directly from the original manufacturer or car parts sellers. Whilst this would promise good quality, the prices you can pay can potentially be extortionate. The typical cost for a rear bumper for a premium brand such as BMW can be comfortably over £300, and that’s before the cost of delivery or professionally painting the car bumper to match the rest of the car is factored in.

Alternatively, you could source a used car bumper. Used bumpers almost always come from donor cars that may have been involved in an accident, written off, and broken up for spares and repairs. Although accident damaged, the bumper itself can often be completely fine and sold on for a heavy discount when compared to purchasing new. Some drivers may also want to upgrade their bumper to a more sporty or advanced version and wish to sell their current bumper off.

At Motor Breaker, you can find the correct used car bumper quickly and efficiently using your car’s registration number plate. On top of that, any dismantler’s performance selling through Motor Breaker is checked thoroughly to ensure they follow the Code of Conduct, meaning you can have faith in the bumper you are purchasing. Best of all, by purchasing a recycled part, not only are you helping the environment, but you could also save up to 85% off the price of a brand-new bumper from the manufacturer! It’s completely free to make a quotation, and there is no limit on the number of requests you can make. For more information on Motor Breaker’s guarantee, visit their FAQ page.

The car bumper may be often forgotten about when it comes to considering important vehicle parts, but they play life-saving roles worldwide every day by absorbing impact energy from accidents. Should you ever be unfortunately involved in an accident, then you may well have to replace your bumper. However, thanks to a thriving used market, a replacement doesn’t ever have to hurt your wallet – even if you have a modern vehicle with a bumper full of complicated designs and gadgets.